Pentacle Theatre: Calendar Girls, by Tim Firth. Friday at 7:30 and Sunday at 2:00, in West Salem. All Access only.
When Annie’s husband, John, dies of leukemia, she and her best friend, Chris, resolve to raise money for a new settee in the local hospital waiting room. They persuade four fellow Women’s Institute members to join them in posing nude for an “alternative” calendar, with a little help from Lawrence, a hospital porter 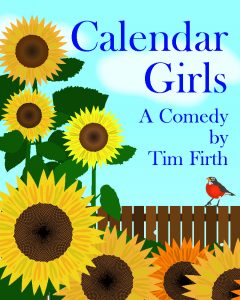 and amateur photographer. The news of the women’s charitable venture spreads like wildfire, and hordes of press soon descend on the small village of Knapeley in the Yorkshire Dales of England. The calendar is a success, but Chris and Annie’s friendship is put to the test under the strain of their newfound fame. Based on the true story of 11 Women’s Institute members who posed nude for a calendar to raise money for the Leukemia Research Fund. Calendar Girls is generously sponsored by Jim and Joan Witt, State Farm Insurance.

Enlightened Theatrics: The Foreigner, by Larry Shue. Sat at 7:30, at the Grand Theatre. All Access only.

The Foreigner is an inspired comedic romp, equal in inventive hilarity to the author’s classic comedy, The Nerd. When a pathologically shy young man named Charlie checks in to the Meek’s Fishing Lodge, his close friend Froggy tells all assembled that Charlie is from an exotic foreign country and speaks no English. Once alone hilarity ensues as damaging revelations are made with the thought that Charlie doesn’t understand a word being said.

Aumsville Community Theatre: The Demise of the Downhome Dealers. Sat at 2:00, at Capitol City Theatre. Family-friendly murder mystery!
Major Country & Western stars Dixie Diver and the Downhome Dealers have come back to their hometown of Mossy Bottom, Texas for a special concert and to allegedly announce the signing of their new contract with Belle Buford and Good Ole Boys Records. Join us for a post-concert press conference and party at The Pig and Poke, where it all started, and now will end… in murder!!

A somewhat irresponsible noble returns home to become an accidental outlaw and then, with Lady Marian’s help, matures into a crusader for true justice! This excerpt focuses on Marian’s efforts to put her childhood sweetheart behind her at the same time as he grows into a hero, leading Little John, Friar Tuck and the rest of the Merry Men as they challenge Sir Guy, the Sheriff (and his calculating wife), and the evil Prince John.

Capitol City Theater: Salem Famous Improv. Fri and Sat at 7:30. Family-Friendly.
Come laugh with Salem’s seasoned comic professionals as they present the improv show that is driven by your suggestions! Limited Seating. We recommend arriving at least fifteen minutes early.

Capitol City Theater: Truth or Dare Live! Sat at 9:30. Adult Content.
A stand-up comedy showcase featuring deep truths and saucy dares chosen by you, the audience! It’s sure to be embarrassing for them and hilarious for you! Limited Seating. We recommend arriving at least fifteen minutes early.

Keizer Homegrown Theatre: The Brothers’ Grimm Spectacularthon! (not for kids!)
The fairy tales of the Brothers Grimm are turned on their heads in this fast-paced, rollicking ride as two narrators and several actors attempt to combine all 209 stories ranging from classics like Snow White, Cinderella, and Hansel and Gretel to more bizarre, obscure stories like The Devil’s Grandmother and Thin Lisa. A wild, free-form comedy with lots of audience participation and madcap fun.

Gallery Theater: Frost/Nixon. Staged Reading Sat at 4:00 at the Grand Theatre.
Richard Nixon has just resigned the United States presidency in total disgrace over Vietnam and the Watergate scandal. Determined to resurrect his own career, talk-show host David Frost risks everything on a series of in-depth interviews in order to extract and apology from Nixon. Nixon, however, is equally bent on redeeming himself in his nation’s eyes. Both men are desperate to out-talk and upstage each other as the cameras roll. The result is the interview that sealed the president’s legacy.

McKay H.S. Thespians: 10-Minute Festival!
McKay’s student-directed One Acts boast a buffet of ten-minute flavors. Character drama? Check. Absurdism? Yep. Musical? Got that, too. Come get a sample of everything!

Willamette University Theatre Department: Wings of Fire, original musical showcase!
Join the Willamette University Theatre cast and playwright/lyricist Hayley Hoffmeister Green and composer Austin Green for a workshop-style staged reading of portions of the new musical “Wings of Fire.” Synopsis: Inspired by historic accounts of the notorious Triangle Shirtwaist Factory fire of 1911, this new musical theater work in-development shares an intimate perspective of this tragic event. The musical score is drawn from contemporaneous American music from the turn of 20th Century to fully immerse the audience in the era.

Learn the basics of improv – with a fun, Informative, and highly participatory class! Capitol City Theater’s has performed Improv in Salem for nearly a decade and are ready to pass down years of stage-earned experience. Conquer your Fears about performing in public by learning how to invent scenes and play games right on the spot. Get ready to learn the basic tenets of improvisational comedy and seeing he importance of where they come from.

Everything Voice-Over!, with Bentley Michaels

Bentley Michaels is the voice of some of the biggest and most trusted brands around the world. Voicing projects for NBC, ABC, BMW, Amazon and Sheraton Hotels, Bentley is a go to voice in this industry. In this workshop, you will hear Bentley’s story of starting in the industry and also gain practical knowledge in breaking down a script and how you could start earning with the VO industry.

Partner Dancing for the Stage, with Mark Lowes of the Utah Dance Company
Cyd Charisse, Gene Kelly, Fred Astaire, Ginger Rodgers are just a few of the many stars of film and theatre who brought dancing into the hearts and homes of millions throughout history. Although amazing dancers in their own right, often their dances included partner work that together created magic on the stage. The Utah Ballroom Dance Company will be joining the Cherry Blossom Festival this year and presenting a partnering workshop specific to musical theatre. Learn to spin, lift, dip, jump, drop with a partner in this exciting workshop with some of the best dancers in the business.

Nail your Next Drama Audition, with Ed Schoaps

What does the director and creative team look for in an audition monologue? Learn how to pick and prepare a monologue that highlights your best qualities, and how to nail cold readings. It’s easy to spot prepared actors at auditions because they’re relaxed, confident and having fun doing what they love best. Please prepare a monologue that’s 1-2 minutes long for this interactive workshop. We’ll help you perfect your craft and nail that next audition!

What NOT to Do in a Musical Audition, by Ann McBride and Kent Wilson
How to pick your music, what to do with your body, and other lessons on how not to audition for musical theatre! Bring a piece of sheet music you would like to sing at an audition.